November 13, 2008
This is the glob array I posted for the contest on 10/31/08 and here is my video that describes one solution using linear equations. In order to get the highest score possible you need to to maximize the number of globs you hit with each equation.

I was hoping to get 5 globs with one and I came close with my first shot, but it missed (1,-1). The same was true for shot #2. Here’s all 5 of my shots. (I made the figure below with Geometer’s Sketchpad.) 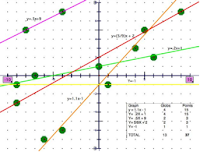 So I managed to get 37 points. I’m not sure that I can do better using linear equations. But what if could use parabolas? Mr. Jacobs introduces us to parabolas in lesson 4. He defines it as the graph of y equals x squared. In set 1 he explores the patterns that help us to move the parabola along the y axis and also how to draw it “upside down” by making the coefficient of the x-squared term negative. In the next video clip I describe more about graphing parabolas.


Here’s the three parabolas I used to get my score of 61 points. I used the vertex form of the equation to draw each parabola. To draw the parabola so its orientation is "perpendicular" to the original parabola switch the x and y in the equation.

To help you use the vertex form of the equation to draw parabolas more effectively try out the Interactive parabola applet at http://www.mathwarehouse.com/quadratic/parabola/interactive-parabola.php

PS. If you go to the website above and want to see a perfectly awful example of a math video game click on their banner promoting the game or click here.

Popular posts from this blog

In lesson 3.3 you learned about linear functions and graphs. As an extension of that lesson I thought it would be useful to try the Great Green Globs challenge because you will need to use the skills you learned in this lesson. And if you didn't learn them all that well, this will be a great opportunity to learn them a fun way. Now using the Globs program ($20 from greenglobs.net) is the best way to go, but you can still compete anyway. Try this practice game to find out what you will be doing in the contest. Here are the instructions: 1. Download the score sheet and print it out. 2. Watch my Youtube video clip (3:40) to get an idea of how to play the game. 3. Graph the function* and write down the equation as shown in the figure below. 4. Continue drawing and recording equations until all 13 globs have at least one line going through them. When finished send your list of equations in an email to globscentral@mac.com . I will enter your equations into the Globs program
Read more

Everything You Ever Wanted to Know about Equations, Lines, Slopes, and Graphs but Were Afraid to Ask 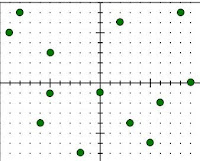 The next lesson in chapter 3 of your math book is on graphs, lines, slopes, and equations. Why would you ever want to learn this you might ask? One very good reason is that in the very near future you will be participating in the Great Green Globs Contest and you will need to know all about coordinate geometry. You will learn by playing the Globs game either on the computer* (which is the best way) or with a printout of the score sheet along with a pencil and ruler. Green Globs: The Game (a description) Thirteen randomly scattered “green globs” are displayed on a coordinate grid. The goal is to "explode" all the globs by hitting them with the graphs of equations entered on the keyboard (or paper). The scoring algorithm encourages you to hit as many globs as possible with each equation in order to get the best possible score. The following lesson will help you to learn all you need to know about graphing equations to succeed in Green Globs. Have a good time, but don’t
Read more